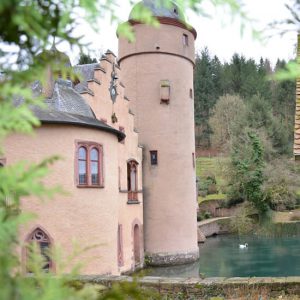 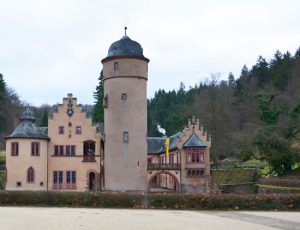 The moated castle became known as the filming location for the film “Das Wirtshaus im Spessart” with Liselotte Pulver in the 1950s. Thanks to its hidden location in the wooded mountains of the Spessart, this Renaissance-style moated castle survived all wars unscathed and has been preserved in its original form. The castle is privately owned and is inhabited by the family “Counts of Ingelheim called real from and to Mespelbrunn” in the south wing. In the northern flight is the museum with the Knight’s Hall. The most famous scion is the Würzburg Prince Bishop Julius Echter, who has shaped the Lower Franconian cultural landscape to this day like no other. 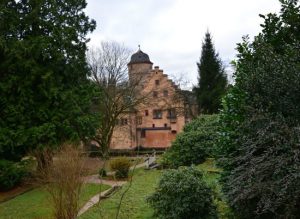 From mid-March to early November, you can visit the castle daily from 9am to 5pm, and you will be guided by a member of the Count’s family.

The café and restaurant “Pferdestall” can only be visited with one ticket.

Note: No dogs are allowed in the park or in the castle. 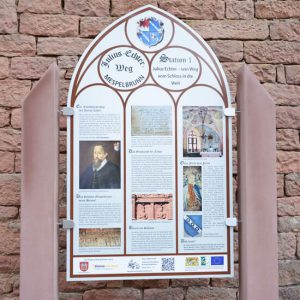 An excursion to Mespelbrunn is also ideal as a starting point for beautiful walks in the Spessart, and elaborate themed hiking trails invite you to explore the area.

Or you wish to go a little further? Via the Autobahn entrance Weibersbrunn you are in Aschaffenburg in no time and can visit the castle Johannisburg and many other sights or stroll in the shops. 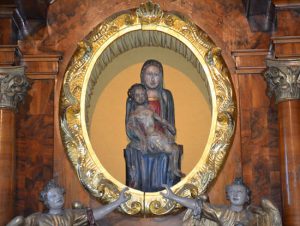 Only two kilometers away is the small Marien pilgrimage of Hessenthal. The complex consists of three churches. In the small Gnadenkapelle there is an image of grace, a late medieval Pietá, in a baroque wooden altar . 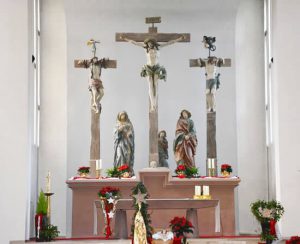 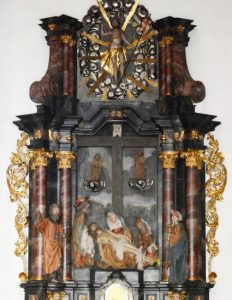 Here is the ideal place for peace and reflection. The next larger chapel served as the burial place of the Counts Echter von Mespelbrunn. Well-known is the tomb of the parents of Julius Echter, with all their children. In the large, modern pilgrimage church stands a powerful crucifixion group by Heinz Backoffen, a Mainz sculptor of late Gothic, at the altar, as well as on the side of a Lamentation Group, which is attributed to the Würzburg sculptor Tilman Riemenschneider. Many pilgrims come to Hessenthal on the Marian holidays, and the processions of the lights in the evenings are especially impressive.